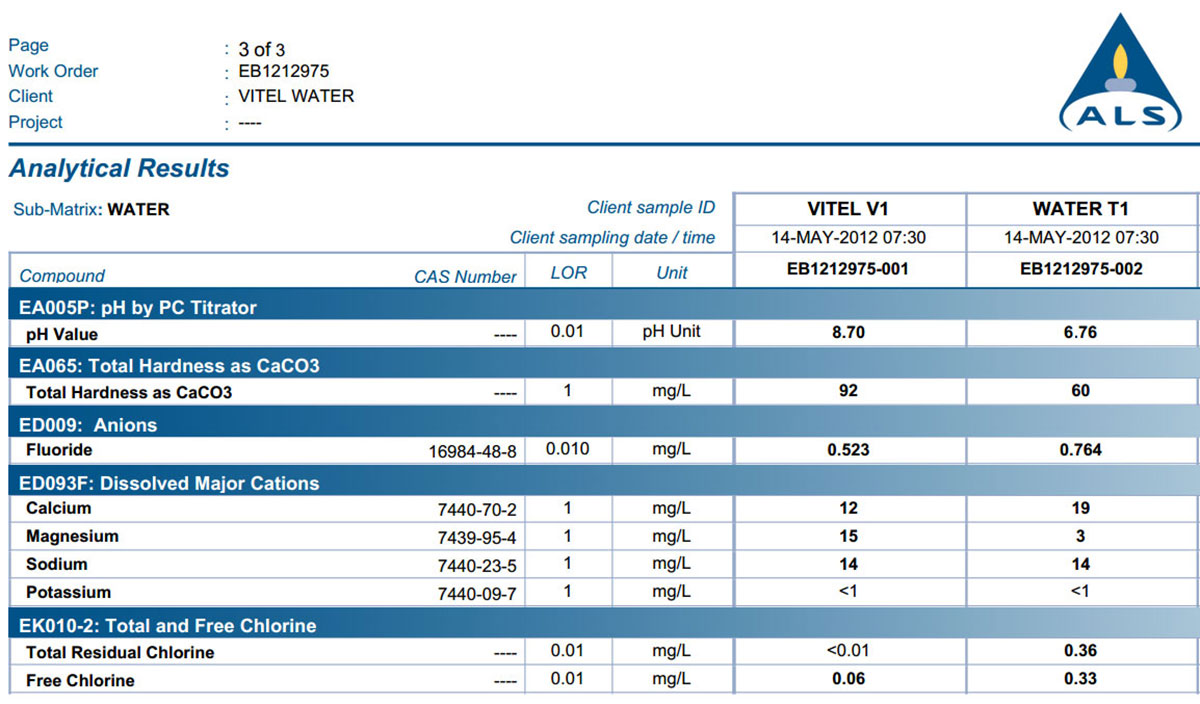 We had the water tested at SGS Australia and ALS Australia.

The water we tested had been transforming for 8 hours.

The results show that Vitel Water Beads raise the pH of tap water from Acidic 6.7 to 8.7 Alkaline. The result 8.7 Alkaline is an amazing result as this is the most beneficial pH for the human body.

Another amazing result is the Chlorine in the tap water has been completely removed. The symbol < means below .01 so you can safely say it removes all of the chlorine in the water. As compared to .36 for tap water.

The fluoride content of the tap water has been reduced from .76 down to .52 Which at this level is safer for human consumption. Fluoride does occur naturally in all waters, it’s the natural part that is not removed. Reverse osmosis will remove fluoride to around .50

We conducted a test of an outdoor spa for bacteria. We emptied the spa completely and filled it with 1000 litres of tap water and placed 3 vitel bags in the spa. The spa is running 24 hours a day at 41 degrees Celsius and is used daily by at least 2 people. After 5 weeks of adding no chemicals at all to the water, we took a sample of the water to ALS for a bacterial test, and the incredible results are below. The owner of the spa had been emptying the spa completely every 8 weeks, and in that 8 week period was spending around $60 on bromide tablets. After 7 weeks with no chemicals, the owner has done a one third water change and still hasn’t added any chemicals to the spa. The owner of the spa says that the water is like a hot spring. There is no ghastly smell, the water is crystal clear, and there is no build up of fats or scale. The owners of the spa have noticed a difference in their skin tone and feel that their skin is softer.

Incredibly the water at 7 weeks had a pH of 8.8

We will continue to monitor the spa and post the results on here in the coming months.

In 1992, the US Environmental Protection Agency considered using an HPC in its new total coliform rule. It found no association between these naturally occurring bacteria and human health. While in 2002, the World Health Organization concluded that HPC was natural and did not result in an adverse health effect. Total plate count or the total number of bacteria should be less than 50000 CFU’s per 100 ml.

The USEPA has determined that if levels of E. coli exceed 235 organisms (Colony Forming Unit or CFU) per 100 mL of water, a health risk to humans may exist.  E. coli levels in urban stormwater can reach as high as 100,000 CFU/ 100 mL. Vitel beads in the spa measured at 1 which is the lowest reading that can be given. A reading of < 2 E.coli per 100 ml is satisfactory for drinking water, and over 100 is unsatisfactory.

For drinking water, the total coliform count should be less than 1 CFU per 100 ml. In unchlorinated water, total bacteria numbers can often be up to 70000 CFU’s per 100mls.

Coliforms detected in a range of water samples.

We conducted a test at Strathpine florist in Strathpine QLD and we tested orchids with vitel water and orchids with tap water.  The pictures were taken 4 weeks after they arrived at the shop. 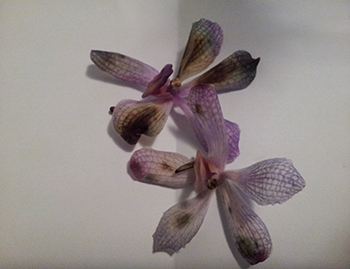